"They didn't even smell of smoke."

I have started the book of Daniel now. How exciting it is!! I love the first chapter because it talks about Shadrack, Meshack, and Abednego. Tim and I call the boys those names sometimes except we use the Veggietales names, "Rack, Shack, and Benny" :). There are a lot of good scriptures to pray for your boys in chapter 1 when praying for wisdom, understanding, knowledge, judgment and skill for your boys.
"young men in whom there was no blemish, but good-looking, gifted in all wisdom, possessing knowledge and quick to understand, who had ability to serve in the king's palace" (v4)
"As for these four children, God gave them knowledge and skill in all learning and wisdom: and Daniel had understanding in all visions and dreams." (v17)
"In all matters requiring wisdom and balanced judgment, the king found the advice of these young men to be ten times better than that of all the magicians and enchanters in his entire kingdom." (v20)
There is also a volitale king named Nebuchadnezzar (aka Nebbi K. Nezzer in Veggietales ;) in the book of Daniel. He has much power and MUCH temper. He orders the execution of all the wise men in Babylon if they do not interpret his dream. Not only did they have to interpret it but also tell him what his dream was because he wouldn't tell them. No one could do it... except Daniel. He prayed and God miraculously revealed to him the dream and the meaning. There is a powerful verse in there that says,
"He reveals deep and mysterious things and knows what lies hidden in darkness, though he himself is surrounded by light." (2:22)
Oh, that we would learn deep and mysterious things as He illuminates OUR darkness!!
On with the story...
Daniel and his 3 friends are placed in high positions of authority. Nebuchadnezzar now builds an idol and says that everyone has to bow down to it and worship it every day when he sounds the horn.
Of course, Shadrack, Meshack and Abednego could not do this because they only worshiped the One true God. He orders them to be thrown in the fiery furnace AND orders it 10 times hotter than usual. It was so hot that the flames killed the guards who had to put them in there.
Now, let's stop there for a second.
They went from blessing to fire in an instant. Have you ever suddenly been thrown into a fiery trial in life? I have. I have felt like the fire in my furnace has been turned up 10 times hotter for 3 years...that it was not humanly possible for me to withstand the heat. Such intensity, such heat. BUT...
there are no burns, I am still alive. Actually MORE alive than before I was thrown in the furnace.
What kind of fire could this be?
Back to the story...
"Then King Nebuchadnezzar leaped to his feet in amazement and asked his advisers, 'Weren't there three men that we tied up and threw in the fire?'..."Look!" he answered, "I see four men loose, walking in the midst of the fire; and they are not hurt, and the form of the fourth is like the Son of God."
How incredible is that? I just want to encourage those of you in trials that you are in a refining fire. It will not burn you. It will refine you and purify you. Refine means to test or to PROVE TRUE/ TO SEPARATE.
"I will bring that group through the fire and make them pure, just as gold and silver are refined and purified by fire. They will call on my name, and I will answer them. I will say, `These are my people,' and they will say, `The Lord is our God.' " Zechariah 13:9
Jesus was with those guys in the furnace just as He is with you in your fiery trial. I think it is so awesome that other people could see Jesus in there and recognize Him. We have such an opportunity in the furnace to display Christ to the world. They will be able to see Him with US and recognize Him as the Son of God.
The furnace is not fun... but God is making you more radiant- like His Son, Jesus. Know that. You are being set apart and made pure by the fire. Keep your eyes on Christ. He is right beside you. He will not let you get burned. Praise Him in there. He is so close to you. Learn deep and mysterious things as you prove Him faithful in the fires of life.
And, remember this...
"Then the princes, prefects, governors, and advisers crowded around them and SAW that the fire had not touched them. Not a hair on their heads was singed, and their clothing was not scorched. They didn't even smell of smoke!" (3:27)
..."So do not fear, for I am with you." Isaiah 41:10
Be blessed!
Steph
><>
"Saving God, You never abandon those who fear You. Through faith I am shielded by your power, even though I may suffer grief in all kinds of trials. But these trials come so that my faith, which is 'of greater worth than gold...' may be proved genuine and may result in praise, glory and honor when Jesus Christ is revealed. Even though I have not seen you, I love you. I believe in You, and I invite You to work Your perfect will in my life. Bring me through fiery trials, I pray, so that Jesus Christ may be revealed in me."
Prayer from my Worship Bible 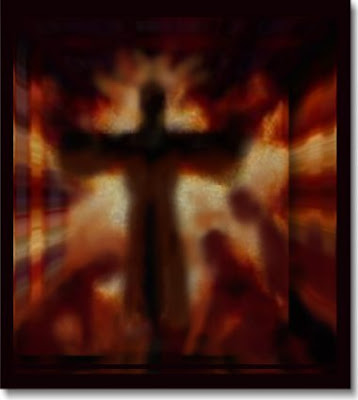 I love this. I needed to read this today. As I sit here with a few tears streaming down my face, I am blessed by your reflections on this scripture and appreciate your willingness to allow God to use you to reach me.