When the going gets tough, the tough gets goin'!

I was reminded of this in my quiet time when I read 2 Samuel 23. We get an inside look into the lives of 3 of David's mighty men.

These 3 guys engaged in some very intimidating battles and miraculously WON.

Check these three tough dudes out:

These are the names of David’s mighty warriors:

Josheb-Basshebeth, a Tahkemonite, was chief of the Three; he raised his spear against eight hundred men, whom he killed in one encounter.

Next to him was Eleazar son of Dodai the Ahohite. As one of the three mighty warriors, he was with David when they taunted the Philistines gathered at Pas Dammim for battle. Then the Israelites retreated,  but Eleazar stood his ground and struck down the Philistines till his hand grew tired and froze to the sword. The LORD brought about a great victory that day. The troops returned to Eleazar, but only to strip the dead.

Next to him was Shammah son of Agee the Hararite. When the Philistines banded together at a place where there was a field full of lentils, Israel’s troops fled from them.  But Shammah took his stand in the middle of the field. He defended it and struck the Philistines down, and the LORD brought about a great victory.

2. Eleazar: Everybody chickens out and bails, except him. He stands his ground and kept fighting until his hand was so tired, it was literally stuck to his sword. The Lord brings a great victory and the chickens come back to get the goods after battle.

3. Shammah: Finds himself in a lentil soup war. :) He takes his stand. Defends and brings the heat on the Philistine soup brigade. The Lord brings a great victory!

Y'all! These guys are such an example for us today. We may be the only one fighting but that doesn't mean we will lose these intimidating battles. We are to STAND our ground. We are to continue fighting the Lord's battles even if everybody else bails out. These 3 mighty warriors did their part and watched God bring GREAT victories through their determination.

"The Philistines" of 2021 seem to outnumber us. I am not sure that is reality but it is definitely the picture the enemy is painting so that we will cower in fear.

A lot of Christians are retreating. And leaving the ones who remain to have a ration of 1:800. But that does not mean we will lose! Often times God wants the battle to be impossible so we will see His glory! Remember in Judges when there was a guy named Gideon?

Often instead of building our army, God shrinks it.

The Lord said to Gideon, “You have too many men. I cannot deliver Midian into their hands, or Israel would boast against me, ‘My own strength has saved me.’ Judges 7:2

That verse tells us why He does it. So we won't boast! So we won't think we won the battles in our own strength.

But what if these mighty men had gone home? God can win battles without any help at all... but I want to be God's mighty one who stays! I want to see His power!!!

I have been studying and meditating on Isaiah 59:19:

When the enemy comes in like a flood,
The Spirit of the  will lift up a standard against him.

What does this mean? What is a "standard"?

One definition is- to fly (to the attack) on horseback

"For he will come like a rushing stream
Which the wind of the Lord drives."

I want to give God permission to use me as part of His standard against the enemy! The enemy is always intimidating. Because he will always be bigger/stronger than we are. But BIGGER is HE Who lives in us! We have to know that it is not going to be by our power or by our might, but by His Spirit that we win these battles! As we hold up our swords toward the enemy's overwhelming momentum, the wind of the Holy Spirit shifts the direction of the flood and drives it away from the people in danger.

It reminds me of the verse I have taught my kids:

Therefore SUBMIT to God, RESIST the devil, and he will flee from you.

When we resist the devil, God uses us to redirect his flood of destruction. I believe the Holy Spirit actually redirects the enemy's fury back toward the enemy. Like that word "nus" that reminds me of a "noose". The enemy proudly builds the gallows. The Lord steps in and redirects his evil fury. He ultimately hangs himself. God has been outsmarting the enemy since his creation. The enemy is a created being who cannot thwart the plan of Almighty God.  That's one reason he is so angry.

When we resist the devil, we flip the spiritual magnets so that the evil is repelled from us and pulled back toward the one who sent it.

As I was studying this, there is a name for it: 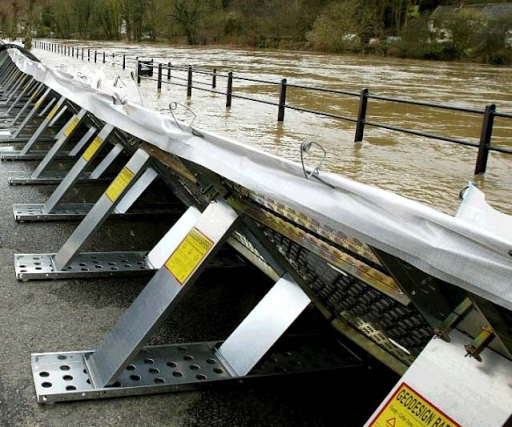 When people ask you what you do, tell them you are involved in "flood mitigation":

When the enemy comes in like a flood,
The Spirit of the  will lift up a standard against him.

We are in the final battles, we need to ask God to raise us up as His standard. We have to redirect the flood back toward the enemy in order to protect the Church. As we deflect and resist the enemy's wicked flood, his evil becomes a boomerang.

"Their evil will boomerang on them."

What the enemy intends for evil, God REALLY does use for good.

One of the names for God is Jehovah Nissi. It means The Lord is My Banner.

Basically, He goes in, wins, and declares victory over the enemy. Then He presents us with the victory banner to hold up.

Moses experienced this when Joshua won the battle over the Amalekites in Exodus 17. Moses went to the top of a mountain and held up his hands and gave Joshua the victory.  Aaron and Hur held his hands up steady the entire night! That is when Moses built an altar and called it The Lord is my Banner. He said,

"Because hands were lifted up against the throne of the Lord, the Lord will be at war against the Amalekites from generation to generation.”

Hands are definitely being lifted up against the Lord in our day. The same hand that swore ON THE BIBLE, on the same day, signed a law to murder babies.

That is declaring war with God. The same hand swearing on the Bible is taking the Lord's name in vain and pretty much breaking all 10 commandments in defiance of the Living God.

Ask God to use you as His Standard against this flood. Ask Him to use you to redirect this evil back toward the enemy. The wind of the Holy Spirit will do it.

God doesn't use the ABLE, He empowers the AVAILABLE.

You will see Jehovah Nissi win impossible battles and then hand you the banner.

Don't shrink back. Grab your sword, get on your horse and GO into the battle.  Ask the Lord what that looks like practically. Maybe it is starting a Bible study for teens in your home. THEY NEED IT!!! They are getting beat up by the enemy. Maybe you need to speak into a friends life who is headed toward an affair in her marriage and believing lies.

Maybe it is going to minister to an elderly person who is dying of loneliness. Get creative! Whatever your gifts are, use them! Mine is speaking forth the Word. That may not be yours. One of my best friends has a strong gift of mercy and is just showering everybody with beauty and love.

You are commanded to use hospitality. I am not sure the Bible defines hospitality as a gift. He just tells us to do it without grumbling! I believe hospitality is one of the most effective things we can be doing right now. Just loving on people in our homes! Maybe getting on your horse looks like getting involved in political leadership- DO IT! We need godly leaders at the helm! Maybe you are older and you have the ministry of PRAYER AND INTERCESSION! You are on the frontlines. Please don't stop praying. You are moving mountains. Maybe you are a pastor's wife feeling the weight of the flood, keep resisting and encouraging your husband to keep going!

Do what God has called YOU to do!

If you don't know, ask Him! He will show you and the Holy Spirit will compel you.

Those are my thoughts for this morning. I just want to encourage you that there is a STANDARD being raised up. A remnant who refuses to back down even if it is 1 against 800. Where there is intimidation, condemnation, and false accusations, the enemy is moving. RESIST HIM. Draw near to God and rely on His power and KEEP STANDING.

Go to God in prayer and tell Him you are available!

"Then I heard the voice of the Lord saying, "Whom shall I send? And who will go for us?"

May the Holy Spirit of God empower you and bless you!