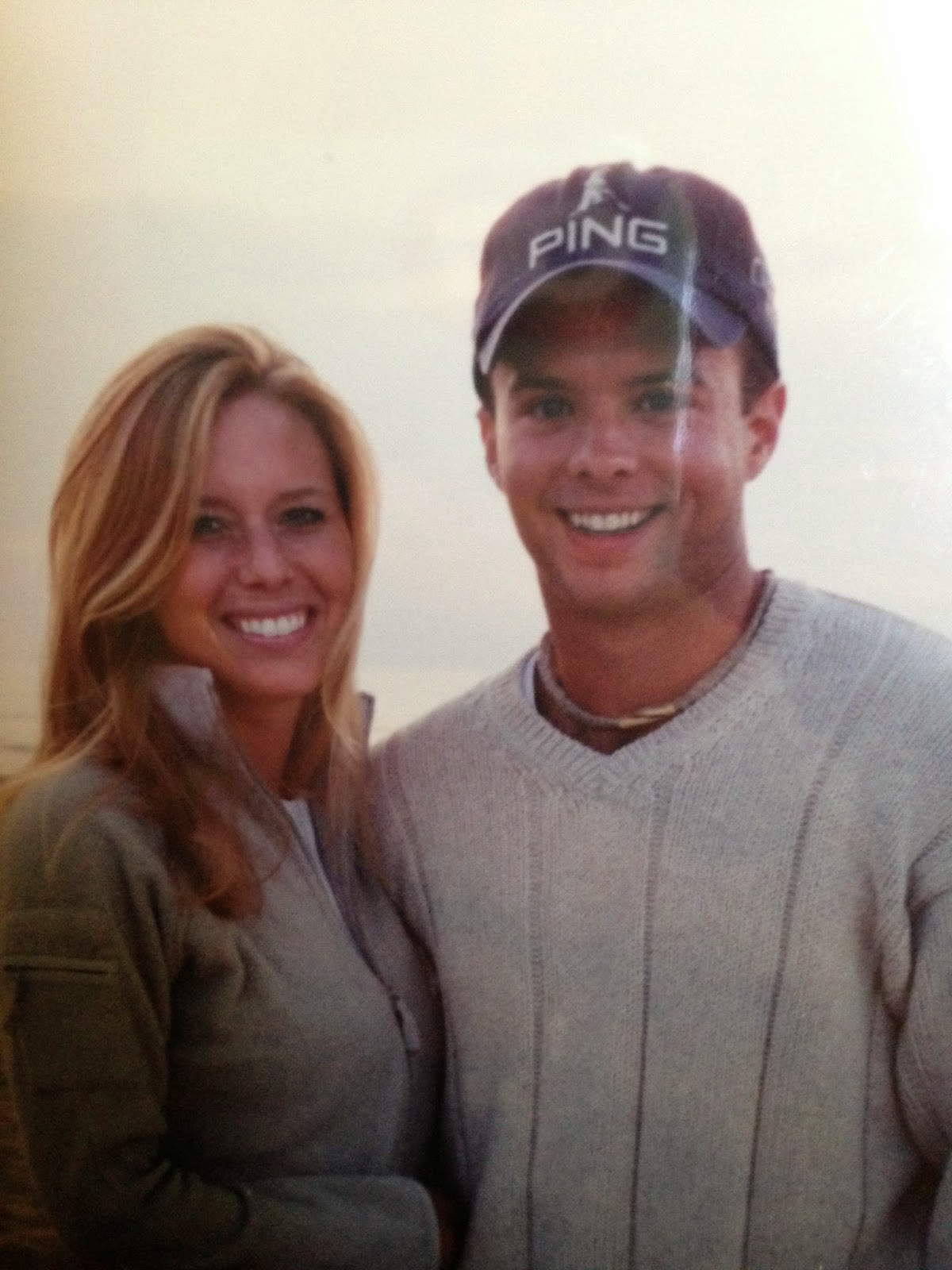 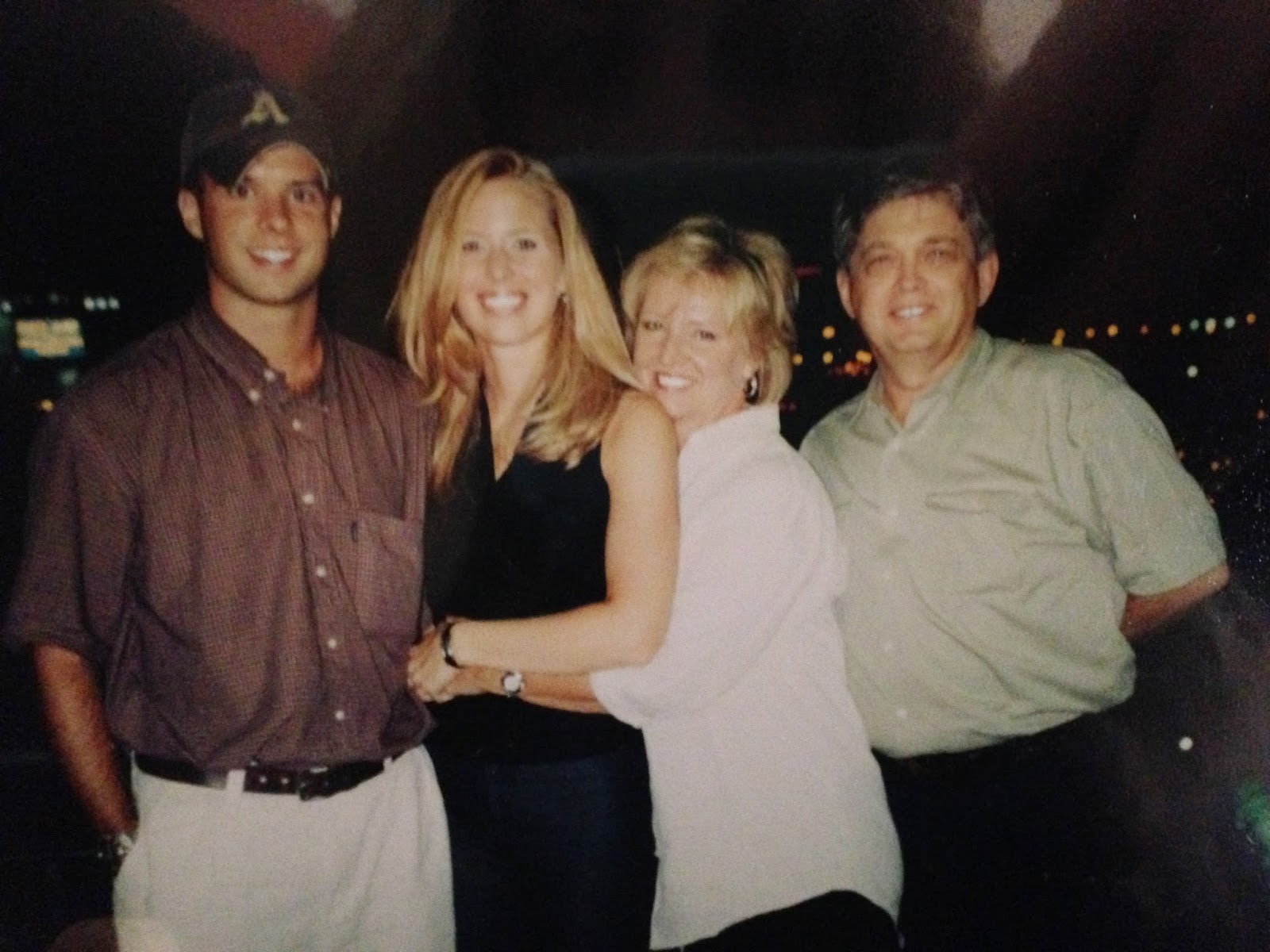 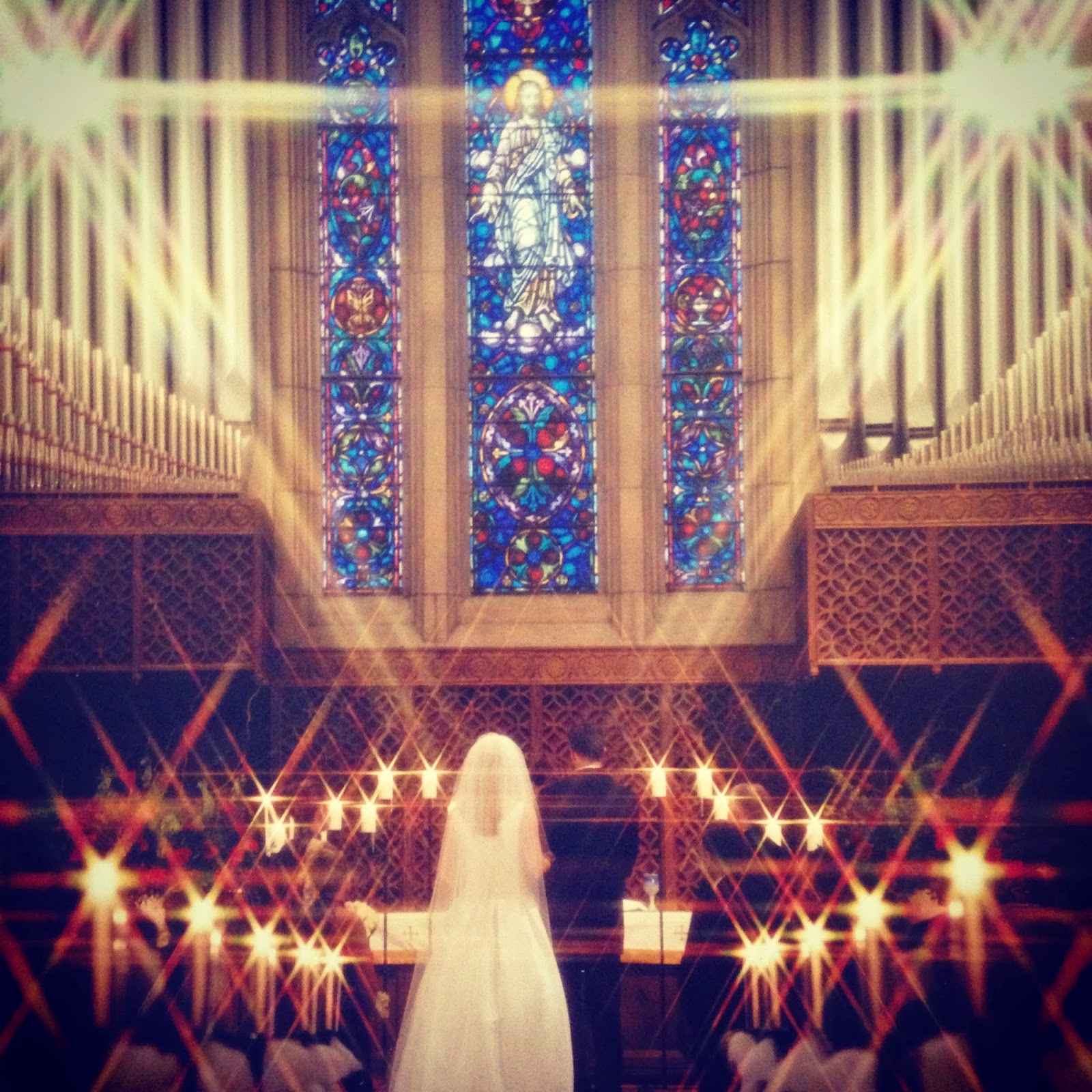 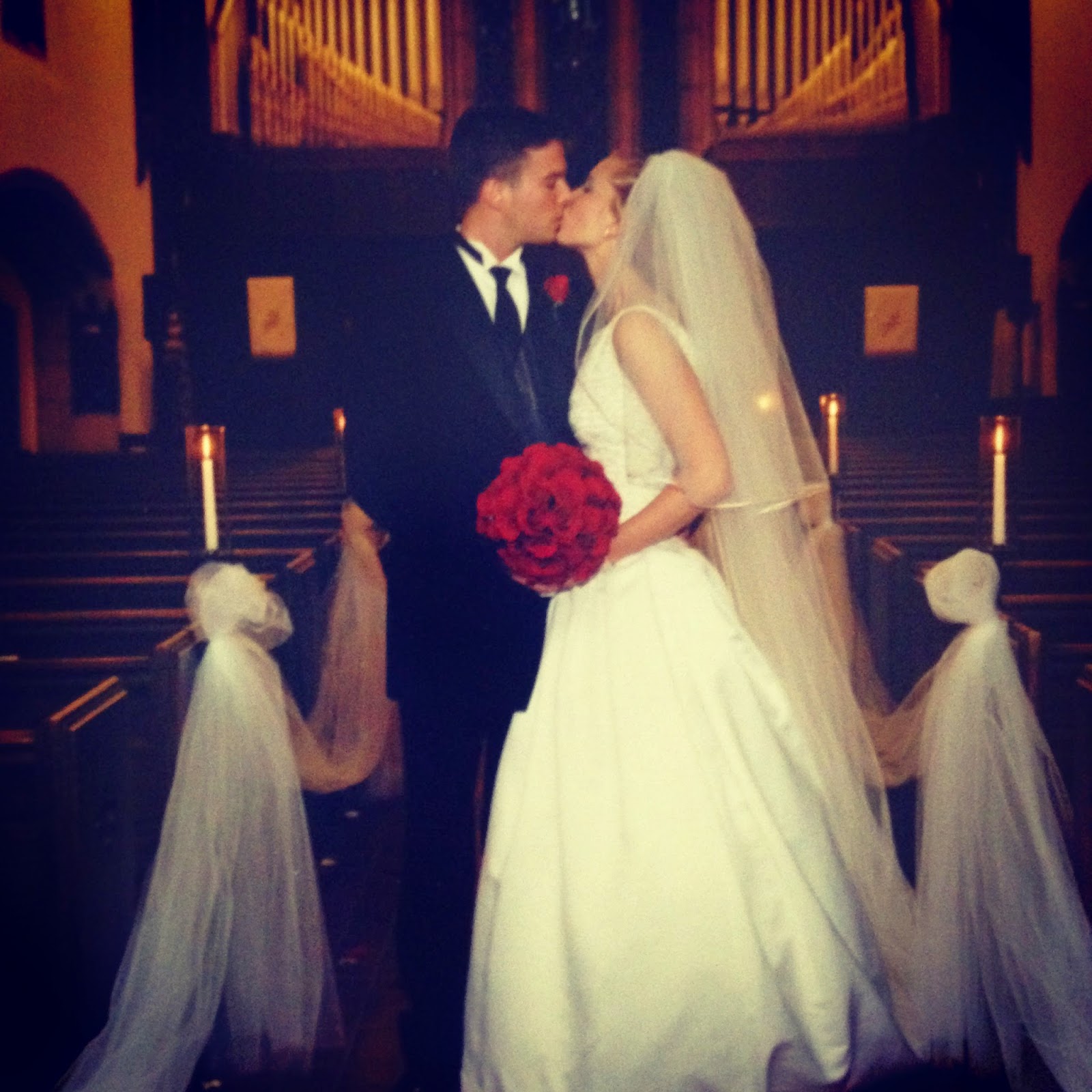 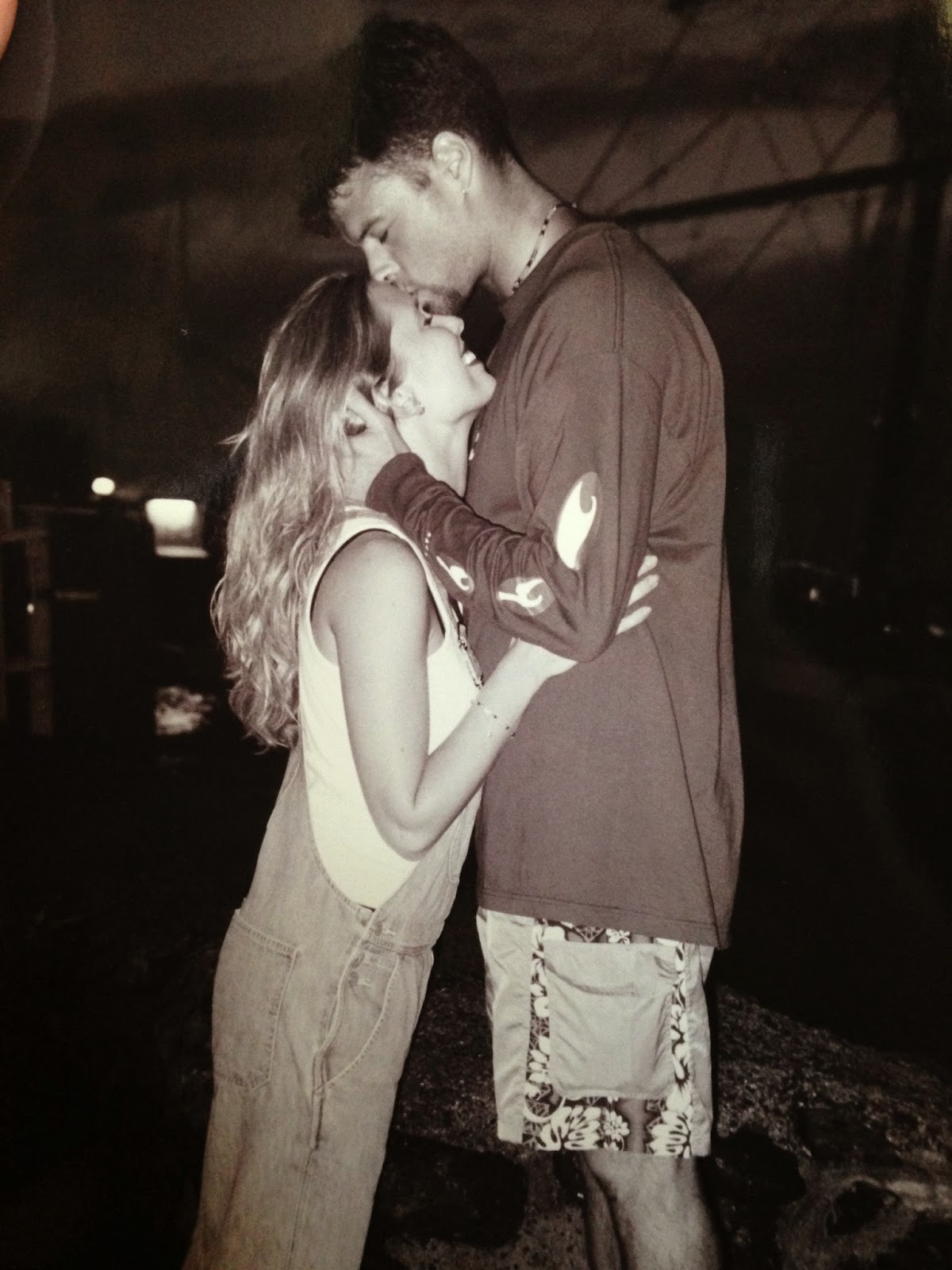 (honeymoon pics-- all we did was kiss. That's still all we do.) 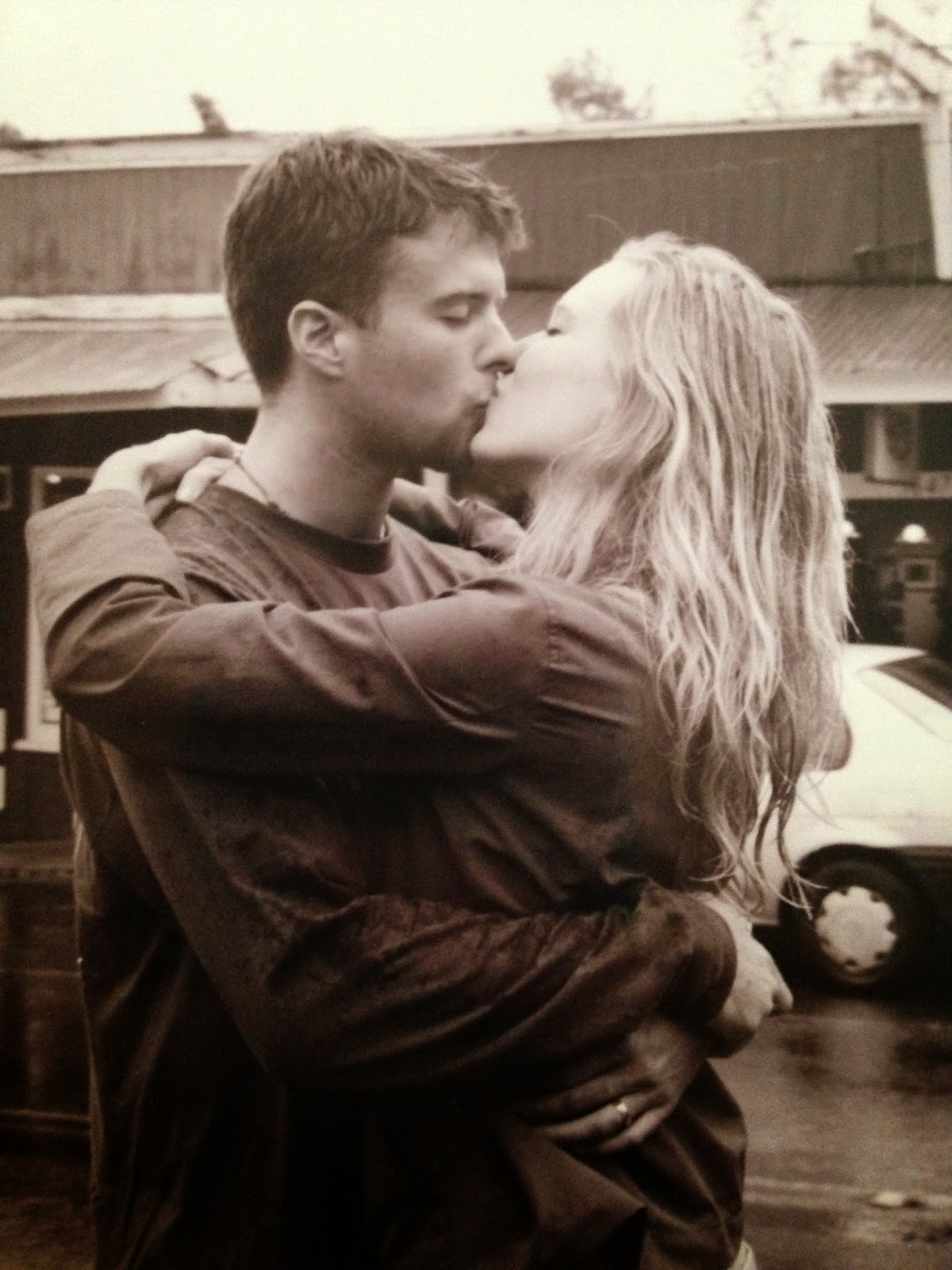 Yesterday was our 13th anniversary. We spent it in a construction zone in our house. Temporary walls and construction dust everywhere. Children laughing and playing.  I was teary most of the day looking around at the blessings I could have never dreamed of. I was 25 years old the day of our wedding. I stood at the altar committing the rest of my life to a man I had known only 6 months. I didn't know much about him other than he was really HANDSOME, really fun, and that God had been very clear that Tim Blackiston was the one He had chosen for me. I tell people we had an arranged marriage because we totally did. God arranged it. We both tried to marry other people and God stopped it. Our paths would have never crossed apart from the sovereignty and goodness of God. Tim lived in Australia while I lived in Tennessee. He lived in Kentucky while I lived in Austria. I want to throw up when I look at how FAR apart we were most of our lives. Yet God was weaving a plan we could have never woven ourselves. He was "arranging" our marriage.
If only I would have known my entire life that God was going to bring me a husband so precious. I would have never looked twice at another boy. I would have never held another boy's hand. I wish I had saved it ALL for Tim. Single girls, do what I didn't. Give your future prince your ALL. Your whole heart... your whole body... your whole soul.
I look back at pictures of our wedding and honeymoon. We were so clueless of how God would change us and bless us. How He would bless 2 undeserving sinners with so much grace. He truly has given us the fairytale.
We spent the night before our anniversary in prayer. Asking for God's forgiveness for how we failed in our marriage last year and laying our marriage back at His feet for His purposes and His glory. We have made so many mistakes, hurt each other deeply, and been a poor representation of Christ and His Bride. Yet, God doesn't give up on us. He forgives, restores, and gently puts us back on our feet on the right path: the path of surrender and adventure.
We are so far outside the boat that He called us out of. We have both tried to go back and started to drown. Now we can't see the boat anymore. The boat is gone and I am so glad. There is not turning back. We are walking on water every second believing that He will suspend the laws of gravity and keep us from sinking.
I have watched my husband be called to follow God in scary ways. Having 5 sons is very intimidating to a man who is deeply committed to discipling them all and loving them with all he has. Not to mention loving a daughter and showing her what a godly man looks like. And providing for them all. God gave him the heart of a father. He really loves it and finds joy in it. He says he would much rather be with the children than on a golfing trip. He really loves us. It is still surprising to me how much he loves us.
Last year was a year of perseverance training. If you are a believer, God will allow seasons in your life that demand long-suffering and perseverance. If you want to know Christ and be conformed to His image, it is inevitable. I have been convicted lately by my attitude toward everything I went through last year. I would wrestle with "is this really necessary, Lord?... it seems harsh". I would look around at other people who seemed to have no trials and easy lives and wonder what that would be like. Yet, God met us and showed us His majesty.
Now, I feel like I can say the same thing as Peter did...
"For we did not follow cleverly devised stories when we told you about the coming of our Lord Jesus Christ in power, but we were eyewitnesses of His majesty."
2 Peter 1:16

There is a big difference in reading books and having your own walk with Jesus and being eyewitnesses of His majesty. We have truly been able to be eyewitnesses to the majesty of Jesus Christ. He met us last year in a dark place. He revealed Himself to us. We now speak with a greater confidence because we aren't speaking from someone else's experience. We speak from our own when we tell you God is able to do more than you can ever think or imagine. We sowed in tears last year and, now, we are believing God's Word...
"Those who sow with tears
will reap with songs of joy.

Those who go out weeping,


carrying seed to sow,
will return with songs of joy,
carrying sheaves with them."
Ps 126

And God answered my question about "is this necessary"...

"strengthening the
That verse has really freed me. That all these "troubles" aren't an unfortunate accident, they are NECESSARY. That verse made my wrestling with WHY??? stop.
I don't know why but if it is helping me get closer to the kingdom of God, then OK.

Marriage is a gift. A beautiful gift. The most precious gift I have ever been given.
Tim is my dream-come-true. I can't believe he chose me... that I get to be "the girl".  Thankful that I was made out of Tim's rib.
How I pray that I will greatly enrich his life!

"Her husband can trust her,and she will greatly enrich his life."
Proverbs 31:11

I asked Tim if he would share some on here! I wrote my side of the love story 6 years ago. You can read it here.
Tim is so cute and so wise. He would be an awesome blogger but he isn't a social media guy AT ALL. No facebook. No instagram. No blog. No desire! LOL.
He is too busy playing guitar and teaching the boys how to throw a curve ball.
So, here is PART 1 of Tim's story....
ENJOY !!!
(because who knows if there will ever be a part 2)
Tim is such a hunk.
He sent me this text last night... 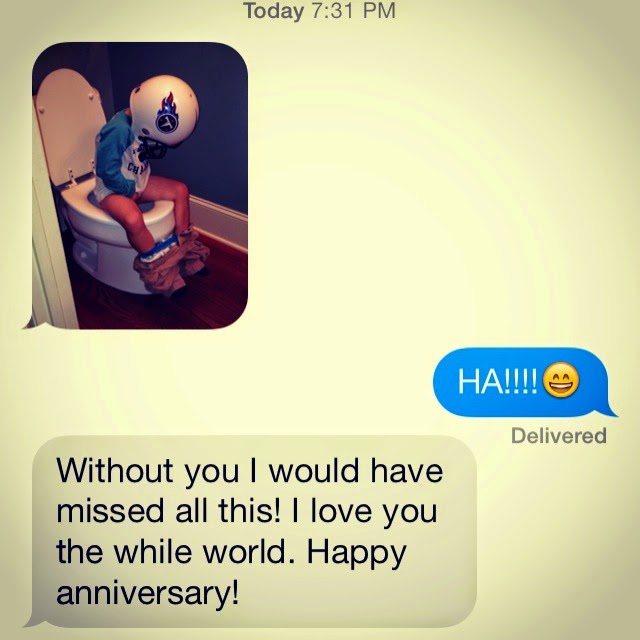 
Hey all Steph invited me to share some of my heart on the blog for our anniversary.

I was reminded recently of the Mark Twain quote, “The two most important days in your life are the day you are born and the day you find out why.”
Well, I was born June 15 1973- and on January 19, 2002… I found out why.
God created me to be Steph’s husband.  I’ve never been so alive, so fulfilled, lived with so much purpose and felt such significance.  I have NEVER, not once or for a day, felt like I had to be someone I wasn’t since I’ve been married to her.  She walked into my life and hit the “color” button.  On that cold, wintery, January day in Northeast Tennessee we walked through the magic wardrobe into a new world where I could be who I was really created to be!  Let’s back up for a minute…

As a single guy I had the Lord, but I didn’t really have much direction when it came to relationships.  If I was interested in a girl I’d ask her out, spend some time with her and somewhere between 14 minutes and 3 months later I’d realize that if I wound up with this person forever I was compromising…or she would.  It seems looking back that it (dating) was just a cycle of wasted time fueled by loneliness and selfishness.  I didn’t handle dating relationships with holiness,
1 Tim 5:1-2 Treat younger men as brothers, older women as mothers, and younger women as sisters, with absolute purity.
my standards weren’t biblical they were “Christian cultural”. I was trying to be a Christian but doing things the way culture was telling me to do them. You might know what I mean. It’s nearly impossible to do, and I really messed everything up.  You know Midas and the golden touch? Um, that wasn’t me. I was the opposite.  I left behind me relationships (including an engagement) done poorly.  I didn’t know how to lead. In fact, I didn’t even know how to follow. Looking back is embarrassing.  But the interesting thing is that God was always there, always prodding me with His Spirit, letting me know when I was off track.  He NEVER let me enjoy my sin.  He never gave up on me.  He had a job for me…just gotta get Jonah headed the right direction.
OK at this point I have to fast forward for you guys, because this is taking me forever to write! I moved to Chattanooga when I finished dental school in Louisville, ready for a fresh start.  I was lonelier than ever but more determined to wait on God’s best for me, to slow down with dating and just meet new people.  One of those was a girl named Val who eventually introduced me to a girl who had just moved to town, her name was Stephanie.  I was 28. I had a good job, a studio apartment big enough for a couch, a mountain bike, and a guitar. I drove a Pontiac grand prix with gold rims…the back seat was filled with empty Gatorade bottles.  I still didn’t have a good filter for dating relationships and how to treat girls with holiness, but I knew this girl was special.  She was super fun.  She liked to run and ride.  She would hang out with the elderly people at the nursing home by her apartment (huh? Who does that?) And she loved God.  She was way more interested in Him than she was in me.  Something was happening in my heart, and it was totally unique.  (I mentioned that I had been engaged before – yes and I thought she was the one – but in that situation she knew better and broke it off.  That was extremely difficult, and looking back on how I led in that relationship I wish I’d have done things so much differently (she made the right decision)… but God had a plan for both of our lives and it wasn’t together , he had someone better for each of us.)

You guys are the cutest! <3 ab

Awwww it's so sweet to hear the guys side of the story. Make sure he finishes. I wanna hear the rest!!! :) :)