As we continue to move into unmarked spiritual territory, we have to sharpen our swords and put on our armor. We need to ask God to show us how to fight His battles.

This is a new level. It always reminds me of when I played Super Mario bros. as a kid. There were always new scary things trying to kill you as you moved up the levels. Some weird new horned turtle would start flying toward me, and I would say, "What is THAT and how do you fight it?".

The closer we get to the return of Jesus, the weirder the opposition is going to get.

Time to use our FIRE POWER and blow these strange new spiritual opponents away.

Our spiritual fire power is going to come from the Holy Spirit and the Word of God. :) 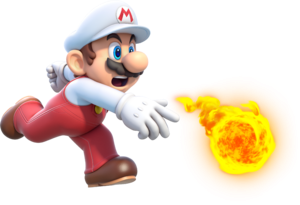 Seriously, we are headed into VERY dark and challenging days. We need to be sensitive to the voice of God.. now more than ever! God warned us that is was going to get more difficult in the last days and about the rampant blindness and deception.

"He was a murderer from the beginning, not holding to the truth, for there is no truth in him. When he lies, he speaks his native language, for he is a liar and the father of lies."

"Satan, who is the god of this world, has blinded the minds of those who don’t believe."

"We know that we are children of God and that the world around us is under the control of the evil one."

"But evil people and impostors will flourish. They will deceive others and will themselves be deceived."

"For false christs and false prophets will rise and show great signs and wonders to deceive, if possible, even the elect."

I would highly caution you to stay away from anything that would cloud your thinking in these days. You have to be sober-minded. If the elect can get deceived, then that means you and I can. Whether you are using alcohol, prescription drugs, or illegal drugs. You need to be fully awake in the spiritual realm. There are so many warnings about being sober-minded in Scripture. Pray about it. Remember, God has not given you a spirit of fear, but of power, of love, and A SOUND MIND. Ask Him to fulfill His promise to you and give you a sound mind.  He will! And when He does, protect it! Protect it with the helmet of salvation.

The enemy is going to pull every crafty trick out of his hat during the last days in order to destroy as much as possible. He knows time is running out.

But so do we and we have access to the power the spoke the world in to existence to be effective! Jesus came, not only to save us in the future, but to save us NOW. We don't have to cower in fear and put all our hope in the rapture. God is MORE than able to save us right here, right now. If you are a Christian, you are marked with Holy Spirit. You have an army of protection.

Jesus gave his life for our sins, just as God our Father planned,

in order to rescue us from this evil world in which we live. Gal 1:4

We need to be examining everything these days and holding on tight to what is true and good (1 Thess 5:21). If we are in the Word and having our minds renewed, we will be able to spot the spirit of falsehood. It reminds me of one Christmas when my mom and I took Hope to the Opryland Hotel for Christmas. They gave you these cool glasses to wear on the boat ride. When you put the glasses on, you could see candy canes everywhere. That is what happens when we get in the Word, we begin to SEE things in the spiritual realm.

If we get caught up in a cause or a movement, we are going to get in trouble. We have to recognize and fight "the Lord's battles". It broke my heart watching the people inside the capitol building fighting for their cause. It makes me sad watching any of the violent rioters over the last crazy year. I so wish I could have talked to that girl who was shot at the Capitol building. I would have told her, "yes, this is WRONG. But we can trust God to take revenge. He will redeem this mess. You don't have to fight this battle with your own hands. Let's get in the Word and figure out what He wants us to do! Evil NEVER wins with Jesus. He conquered it."

Those rioters were fighting for their cause but didn't have the restraint or wisdom of the Holy Spirit. They didn't understand that we don't wage war as the world does.

"For though we live in the world, we do not wage war as the world does. The weapons we fight with are not the weapons of the world. On the contrary, they have divine power to demolish strongholds.  We demolish arguments and every pretension that sets itself up against the knowledge of God, and we take captive every thought to make it obedient to Christ."

It is so easy to get carried away in conspiracy theories today. Especially when some of them are TRUE! But we have to examine these things and see how they line up with the will of God.

And, we have to want His will more than our own! It may be His will to speed up the last days and get us out of here. I don't know but not our will be done, HIS!

We have to use the weapons God has given us until He comes for us. Those weapons can demolish strongholds. And that is what we are up against... STRONGHOLDS. You can shoot a "stronghold" with a gun. You can't demolish arguments by breaking through a window. The weapons we fight with are not weapons of this world. The Word of God can shatter strongholds. The gospel can break through the most hardened heart and bring true change.

That doesn't mean we don't engage in politics. I am so encouraged with Christians obeying the call to LEAD! It also doesn't mean we won't be engaging in a real war soon when liberties continue to be stripped away and our constitution ignored. My godly grandfather engaged in battle. And he did have to use the weapons of this world on a Navy Ship. It doesn't mean we don't use our VOICES to speak out against evil. Especially evils like euthanasia and abortion or other forms of violence where people are being murdered. Speak out! Fight! But don't take revenge. Leave that to the righteous anger of God.

The world is going to hate us. Jesus was really clear about that. He doesn't want you to be caught off guard when it does. The world hates us because it hated Him first. It hates us because Jesus rescued us out of it and it no longer has power over us.

We must be shrewd as snakes!! And respond to spiritual warfare in wisdom. That is where the Holy Spirit comes in.

Because he knows that  JESUS CHRIST is the hope of the world.

"HIS NAME will be the hope of all the world.”

We are entering into a spiritual famine. We got a taste of it in 2020 when the Churches closed.

"The days are coming," declares the Sovereign Lord, "when I will send a famine through the land-- not a famine of food or a thirst for water, but a famine of hearing the words of the Lord"

It is time to stockpile the Word and put it in your warehouses like Joseph did when God warned him of coming famine!

"He gathered up all the food of the seven years when there was plenty in the land of Egypt, and stored up food in the cities; he stored up in every city the food from the fields around it.  So Joseph stored up grain in such abundance—like the sand of the sea—that he stopped measuring it; it was beyond measure."

"When the famine had spread over the whole country, Joseph opened all the storehouses"

The best thing you can be doing right now is STOCKPILING the Word of God. So as we move into (what I believe is a) spiritual famine, you will have a storehouse to open for starving people.

We need to be taking in our daily bread and living water.

God will use us as rivers in this dry and parched land.

“He who believes in Me, as the Scripture has said,

out of his heart will flow rivers of living water.”

You  heart will turn into a river of living water when you believe in Jesus and know Scripture.

So, what do we do in response to all this evil?

We stockpile the Word.

We get ready to GIVE.

We open our homes.

We give our children Living Water so they won't thirst during the famine.

And we ask God to use us in ways we cannot even imagine.

We don't SHRINK BACK.

"Now to Him who is able to do immeasurably more than all we ask or imagine,

according to His power that is at work within us"

His POWER is at work within you. He is going to do so much more than you can imagine.

Surrender your fear. Ask God to fill you afresh with His Spirit for these days.

If you don't know Jesus Christ as your Savior, today is the day of salvation!

You don't have to drown in fear. He wants to replace your fear with faith. Stop what you are doing right now and ask God to forgive you. Believe in Jesus Christ as THE WAY of salvation and you will be saved. Email me if you do this and I can help you learn how to walk with God. God saved me. He changed me. He will do that for you too. He doesn't just love you, He SO loves you.